A Dive Into Ethereum RPG Illuvium 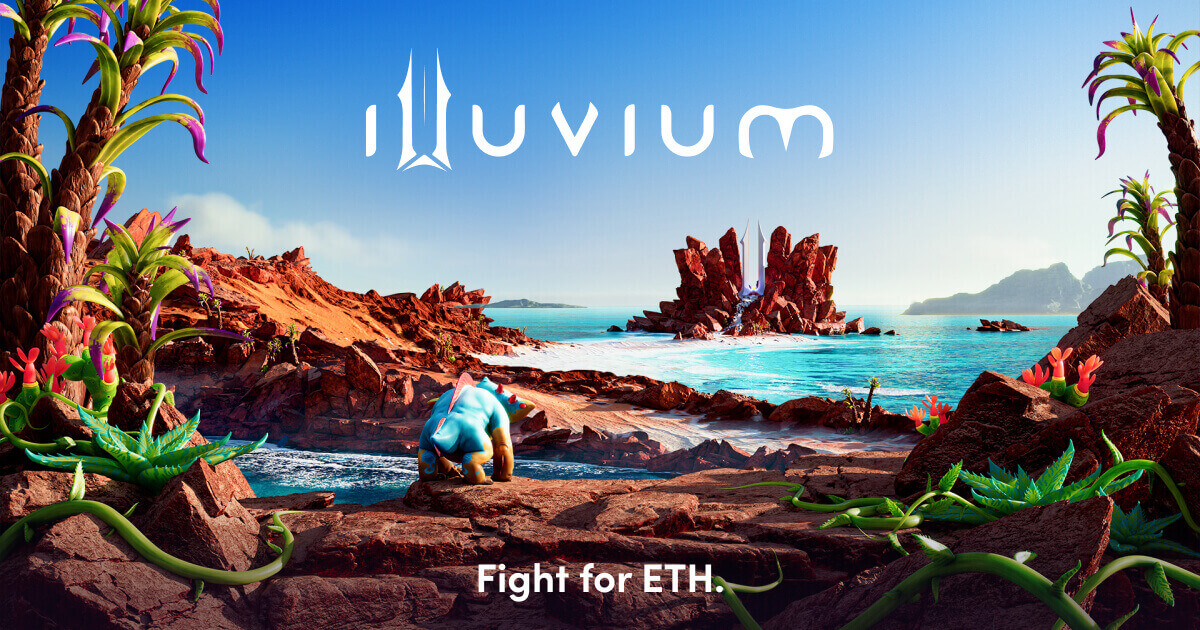 As web3 continues to gain momentum, we’ve seen an influx of new and innovative ideas emerge within NFT gaming landscape. However, despite all of the innovation, no live gaming project can genuinely be considered AAA.

However, this could change very soon as there are a handful of projects in development that are vying to become the first NFT-based AAA gaming title. Among these projects is Illuvium, a decentralized role-playing game (RPG) built on top of Ethereum.

The following is a project analysis of Illuvium, highlighting what you need to know about this highly anticipated game and decentralized economy.

Illuvium was co-founded in 2020 by Kieran Warwick (CEO), Aaron Warwick (game designer) and Grant Warwick (art director). It is a fully decentralized, AAA, blockchain-based video game built on the Ethereum Network’s Layer 2 Solution, Immutable X, with the world of Illuvium built in Unreal Engine 5. It is a vast and open-world role-playing game allowing users to explore its landscape.

The team behind Illuvium is an extensive and multinational organization of over 75 people with a diverse set of work history. The core team is comprised of individuals with very notable backgrounds. Here are but a few:

Nate Wells - Game Producer with past experiences in Bioshock and Bioshock Infinite and he also served as Lead Game Producer on The Last of Us and Rise of the Tomb Raider, both phenomenal games.

Roger van de Beek - Lead Concept Artist who has experience working as a Character Designer for Paizo who are renowned for their esteemed table-top role-playing game franchise, Pathfinder.

Alexander Belbari - Lead Animator with past experiences working on projects such as Transformers, Avengers, Guardians of the Galaxy, League of Legends and more recently, The Mandalorian.

The World of Illuvium:

Players start by crash landing on a ruined land of allure and awe. The reason for this world’s demise is a mystery, but the devastated land is home to creatures known as the Illuvials, beasts of wonder with god-like powers in which players are able to catch, collect, level up, battle and trade.

Shards, crystals specially harvested from the planet’s surface, are used to capture these creatures and claim them as your own. Players embark on a quests across diverse and immense regions to uncover the mystery behind the planet’s fall and the Illuvials themselves, all while hunting and capturing these majestic beasts and utilizing their powers to advance in the mission.

These creatures are the local fauna of Illuvium. Illuvials are creatures that wield magnificent powers. They roam the landscapes and vary in shape, size, color, attribute, affinity and class. As the player, you have the ability to catch these beings through Shards and can then summon them to use in battle throughout your adventure.

The system seems to be similar to Pokémon. For example, Shards are the equivalent of Poké Balls with higher leveled Shards being required to catch higher leveled and more rare Illuvials. You’re also equipped early on in the game with The Illuviary (a Pokédex), an almanac detailing all of the Illuvials that you discover.

The Illuvials you capture are in-game NFTs that get sent straight to your wallet and can be traded on the IlluviDEX, Illuvium’s native NFT marketplace. Furthermore, players can choose to duke it out with their monster comrades in the Battle Arena to earn prizes.

Adventuring - Starting off, you’ll customize your character and select your Polymorphic Subordinate Drone (PSD), which serves as your sidekick. Your PSD can store your items, assist you in battles, mine and harvest minerals and forge said minerals into helpful items. Additionally, the weapon you choose for your character determines your class.

Tasked with uncovering the tragedy that befell the land, you’ll get to explore varied landscapes and discover Obelisks that help further unlock the land and the mystery behind it.

Combat - While exploring, you’ll engage in turn-based battles against a wide range of Illuvials that roam the wild. While your character has the ability to attack, your main arsenal will be a party of Illuvials that you can command to dish out damage or provide support.

How you construct your squad will dictate your path to victory in battle. Your Illuvials can form special relationships with one another, depending on their similar affinities or classes, called Synergy. Your party can consist of different synergy types resulting in bonuses for your squad allowing you to get the upper hand in battle.

Classes - Illuvials are categorized into one of five different classes:

Your choice in class can affect how the battle plays out as matching classes or affinity can form Synergies that grant bonuses to combat. On top of the 5 classes, some Illuvials can evolve into more powerful forms that manifest two classes creating a new class altogether such as Slayer (Fighter + Rogue) or Invoker (Psion + Psion).

Affinities - Illuvials are also categorized into one of five different affinities:

Similar to classes, affinity type plays an important role in combat. Not only for creating a synergistic team but knowing which affinity to counter your opponent’s affinity is crucial to obtaining victory. Also similar to classes, there are more powerful types of affinities that some Illuvials are attuned with upon ascending such as Frost (Air + Water), Inferno (Fire + Fire) and Overgrowth (Nature + Nature)

Fusion - Illuvials can become an even greater force of power by fusing with one another. Certain conditions must be met before you are able to fuse your battle companions. You must have 3 identical Illuvials with each of them having maxed out their level through combat.

Weapons and Armor - As previously mentioned, your character is capable of participating in battle. You can equip these characters with weapons containing gemstones that enable you to boost your team with an aura during combat. Armor also plays a role in providing strategic defenses with specific properties.

Story Mode - This will be the ideal mode for most players as it allows you to relax and freely venture off at your leisure while taking in what the game has to offer. Here is where you’ll be able to kick off your journey into the world of Illuvium. You’ll explore different terrains and battle many different Illuvials while trying to unveil clues as to why the land is now shattered. Obelisks can be found that reveal more of the landscape for you to discover and Illuvials to collect.

Battle Arena - Here players can choose to battle other players and test their team of Illuvials. You can battle against a random opponent with similar skills in Ranked Arena or set up a match with a player in ad-hoc wagered battles in Leviathan Arena. Other players can still join as spectators and place bets on the match.

Unreal Engine 5 - Created by Epic Games, the Unreal Engine software has been outsourced for years due to its outstanding features and capabilities and has been used for creating many amazing and top-notch quality video games that we know today. Unreal Engine 5 is the latest and is a highly advanced tool that is capable of creating astonishing, high-fidelity visuals and exceptional A.I. Creating Illuvium within this engine allows it to achieve a much higher quality.

AWS Lambda - Supplied by Amazon as part of Amazon Web Services, AWS Lambda is a serverless computing platform that enables developers to build applications that respond promptly to new information and events. This enables Illuvium to provide unlimited scalability while preserving a cost-effective solution.

ILV tokens are awarded to players for playing Illuvium. They are rewarded for completing special achievements, in-game quests, winning tournaments and participating in events.

Illuvium Vault - This is where fees from in-game purchases and trades on the IlluviDEX get sent to for liquidity incentives. Holders of ILV tokens can use them to stake in the Illuvium Vault for ILV incentives or sILV, which serves as the in-game’s secondary asset. ILV rewards are locked for a year but users can opt to transfer their rewards to sILV, skipping the vesting period and acquiring the USD equivalent.

IlluviDAO - Holders are also entitled to participate in Illuvium’s DAO, which allows the community to play a vital role in improving and expanding the Illuvium experience through what is known as The Illuvinati Council, Illuvium’s governance model. $ILV holders will also have the capability to nominate an individual for a seat within the council.

In-Game Purchases - Within Illuvium you’ll be able to make in-game purchases using ETH and the fees will be sent directly to the Illuvium Vault. Such purchases are:

IlluviDEX - Illuvium features a built-in decentralized exchange that will serve as its marketplace for the trading of all Illuvials and other in-game NFTs such as weapons and armor. There is a 5% fee deducted from each sale that gets sent directly to the Illuvium Vault for incentivized rewards.

Illuvitars - Illuvitars are customizable avatars used as Profile pictures in the Illuvium universe. They consist of a portrait and accessories. You’ll be able to unlock more accessories by completing in-game activities.

Land - You’ll be able to purchase your very own plot of land in the Illuvium universe. Here you can build your digital compound where you can extract resources, construct NFT blueprints and funnel in rewards!

In conclusion, Illuvium has massive potential to leave an impressive footprint in NFT gaming history with what it aims to achieve and with talented team members working to keep those gears in motion. It boasts an exceptional structure to help maintain a great level of fidelity and functionality that can provide an unprecedented NFT gaming experience. It’s shaping up to be a full-fledged game that can plausibly rival some AAA titles currently on consoles and PC. Illuvium is set to release sometime this year on PC and Mac. Check out the links below for more information!

Disclaimer: This article was written by a member of the Fief Guild community.